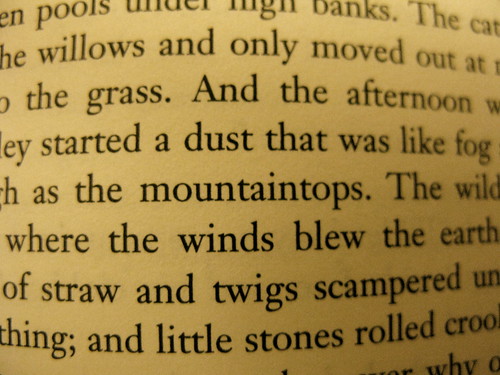 Inspired by this Reddit thread (which was inspired by this), I want to do justice by a couple of books that I didn’t see mentioned (enough, or sometimes at all). All of these changed my life:

East of Eden. I received a beautiful, thick paper, serrated-edge copy of this from my best friend in college. Beneath the front flap, she’d written the number one, and her name, and mine. Pass it on, she’d implied.

And then it sat on my bookshelf for the next seven years.

I probably had some other excuse at the time, but I don’t think I was ready for it at twenty-one. Steinbeck called it his life’s work. Every time I tell people this, I feel a little embarrassed, and now I’ll tell anyone who cares to know: it made me cry. It made me cry in that awfully rare way which is not really from sorrow or joy or anger, but from recognition of all the things we can’t properly articulate about life and people. Somehow, Steinbeck did.

Fahrenheit 451. I read this book over a few weeks as a junior in high school and appreciated it not at all. I read it again, at twenty-seven, in one day. I’m convinced it’s meant to be read that way, or else it loses its effect. Everything about it is breakneck, an exhortation to consciousness and understanding of the world that should occur in a single sitting. Bradbury was a poet, a storyteller, and a genius gift to the English language.

Where the Red Fern Grows. The truth is, I can’t really remember the plot, or the characters, or the writing. I only have one memory of it: I was seven and it was nighttime and I came to the end of it and I began to bawl for ages. It’s the only time from my childhood I can remember crying over something that wasn’t a physical hurt, or an unkind word, or a disappointment. The book uncovered some well in me that was deep, right at the center. I understood something new, but my only way of expressing that was to cry the way an infant does when it has no words.

It’s one of those silly childhood things, and then it’s not.